On July 25, at the ZKM Art and Media Center in Karlsruhe, Germany, Rasa Šmite will take part in the Beyond festival, where the artist will present a lecture “Poetics and Aesthetics of Ecodata” and the full video version of her and artist Raitis Smits’ artwork “Atmospheric forest”.

From July 23 to 25, at the ZKM Art and Media Center in Karlsruhe, Germany will take place the Beyond festival. The festival will host a Future Design Symposium: a creative collaboration of science, technology and art and an experimental laboratory for new forms of art, which simultaneously offers a glance at social effects regarding new technologies in a global context. Whilst having international orientation, the symposium does not only create a network composed of science, technology and art, it also concerns itself with current economic, societal and environmental problems. Its goal is to find solutions, research propositions and alliances to confront the tasks of tomorrow.

During the three days, the symposium will cover six topics: SmART, AI for Good, Designing from Emerging Futures, Green new Deal(s), Artists for Future and New Narratives for the 21st Century.

On July 25, exploring the topic “Artists for Future”, Rasa Smite will present a lecture “Poetics and Aesthetics of Ecodata - Sensing and Visualizing the Forest Emissions” in which the artist will talk about her artistic research project “Atmospheric Forest”, which explores and visualizes the relationship between the aroma of trees and global warming.

We are used to thinking that planting trees is one of the key strategies in solving the climate problems. But we barely remember that the trees are living organisms, and a part of a larger and more complex ecosystem. The trees just don't produce oxygen, but breath as well, releasing a part of the carbon back into the atmosphere. They emit thousands of various volatile organic compounds (VOCs), which we can recall as the habitual smell of the forest.

Scientists for a while already have understood about the link between the fragrant trees and warming climate, but it is only recently when they've become aware of a massive scale of these processes. Within minutes to hours of trees releasing them, VOCs react with ozone and other chemicals in the atmosphere. They also react with air pollutants from anthropogenic sources, creating aerosols and contributing to cloud formation, thus, possibly, making global warming worse…

Predicting the effects of natural volatile emissions and its relation to the warming climate has been more complex than scientists thought, thus opening up a free vast space for artistic interpretations, speculations and future visions. For three years the artist  has been working on her artistic research project “Atmospheric Forest” in collaboration with the Swiss scientists from The WSL Institute in the framework of SNSF-research project entitled “Ecodata-Ecomedia-Ecoaesthetics” in Basel.

To explore the interaction patterns between the emitting trees and changing weather conditions, Rasa Smite created an immersive environment in VR and visualized the data from one growing season of the pine-tree emissions in Pfynwald. It is an Alpine forest suffering from the drought, and which Swiss scientists have turned into a 'living observatory'. To extend her artistic research on volatile emissions, she also performed a 'sensing experiment' by harvesting the resin and transforming it into two other substances: by distilling process the artist obtained a volatile liquid – a turpentine, an 'extract' of the forest scent; and by cooking she got a hard consistency material – a colophon, a sculpture of a forest fossil.

By creating immersive experiences of the emitting virtual forest, as well as by performing sensing experiments with resin transformations, the “Atmospheric Forest” research project aims to challenge and deconstruct existing viewpoints and to reveal new perspectives. Moreover, Atmospheric Forest by sensing and visualizing the interaction between the 'terrestrial' and 'atmospheric' processes, creates green poetics and new aesthetics of 'ecological'. 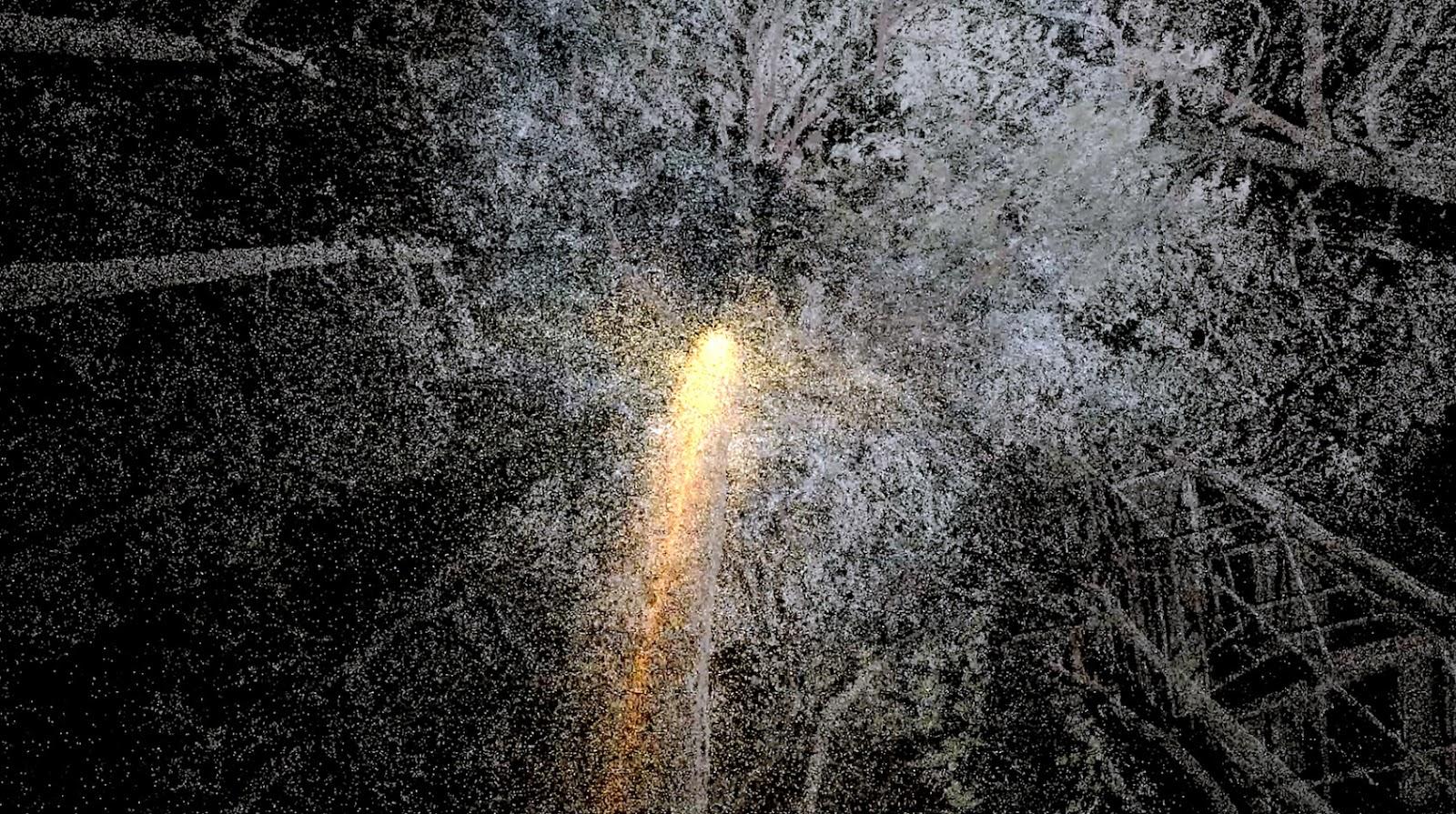 The festival will also feature a demonstration of the full video version of the artwork "Atmospheric Forest" by Rasa Smite and Raitis Smits. The artwork is currently on display until February 28, 2021 at the exhibition “Critical Zones” at the ZKM Art and Media Center. "Atmospheric Forest" visualizes the complex relations between a forest, climate change and the atmosphere. It is a result of a three-year artistic research project on Pfynwald, an ancient Alpine coniferous forest, suffering from drought, which Swiss scientists have turned into a 'living observatory'.