From May 23 until May 27, during the Swamp School opening week in the 16th Venice Biennale of Architecture, the extensive program of the Swamp Radio will take place featuring lectures, performances, workshops, and the presentation of Biotricity. Swamp Radio Laboratory (2018), the new installation by Rasa Smite and Raitis Smits.The Swamp School, curated by Nomeda Urboniene and Gediminas Urbonas, is the national presentation of Lithuanian at the 16th International Architecture Exhibition – La Biennale di Venezia, which has been developed in close collaboration with MIT School of Architecture and Planning, and other international education and research institutes, artists, designers and architects.The Swamp Radio opening programme of the Swamp Shcool takes place in the II Giardino Bianco Art Space, Castello 1814 – via Garibaldi, Venezia. 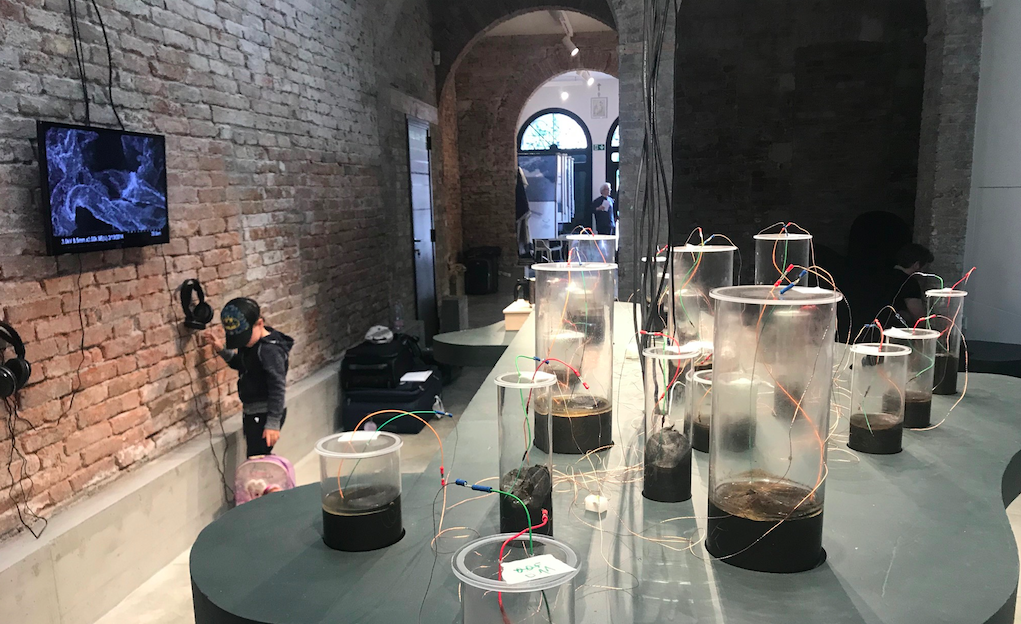 The Swamp School curators Nomeda Urboniene and Gediminas Urbonas have created a concept for “a changing, flexible, open-ended infrastructure that supports experiments in design, pedagogy and artistic intelligence”, and which will function throughout the Venice Architecture Biennale, from May 23 until November 25, 2018. For its first individual pavilion, Lithuania takes a challenge to reflect upon The Biennale’s traditional format of “national pavilions”. By choosing the concept of Swamp, the curators and architects are emphasising the networked efforts and creating temporarily situated collaboration platform at the interstices of so many other “landed nations.” As curators argue that: “The concept of the swamp incorporates many of the battlefields of postmodernity: conditions of hybridity, the idea of “nature,” questions of human and nonhuman agency, strata of history and of the possibility of a future”. Using artistic interventions and open architectural forms the Swamp School has been created as a surroundings that support adaptation and learning to meet the demands of a changing environment. Invited designers and scholars will conduct performative lectures and lead workshops for participants and visitors to the Biennale. Altogether, more then 60 international participants – artists, architects, designers, scientists, theorists, and students will get engaged in the various activities of Swamp School. The international programme of the Swamp School will comprise three thematic chapters, the first of which is the opening programme – Swamp Radio that will be followed by Futurity Island and Commonism. 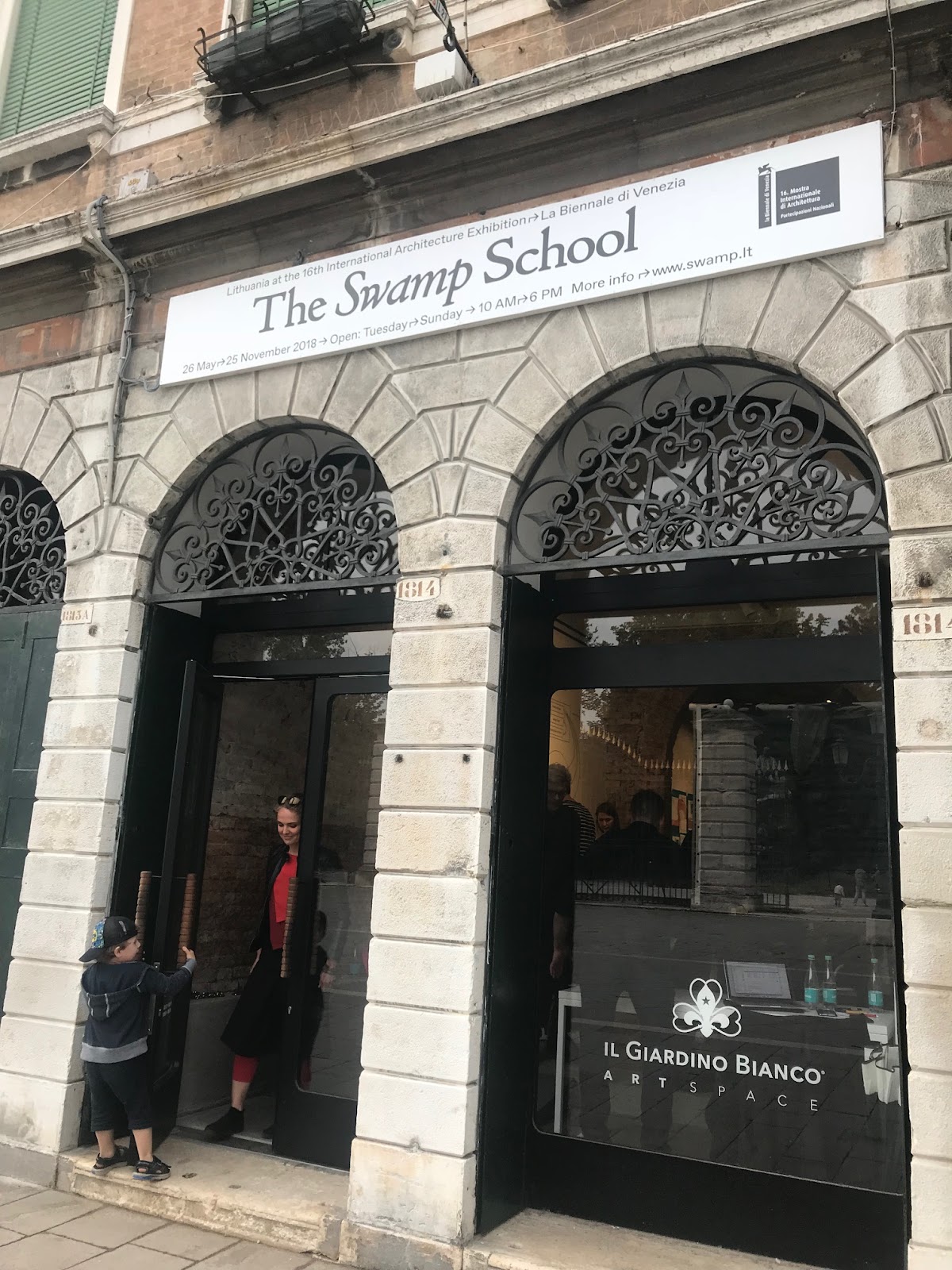 The Swamp Radio, the first thematic chapter, was developed in a collaboration between the Swamp School curators – Nomeda Urboniene and Gediminas Urbonas, and Swamp Radio interlocators – artists Rasa Smite and Raitis Smits, who together with the scientists from Latvian University for many years now have been experimenting with green energy technologies. Rasa and Raitis set up ecosystem monitoring laboratories in the swamps and other wetlands, and create poetic real-time sonic environments.

The Swamp Radio opening week evening programs will feature performances by internationally renowned sound artists – Sam Auinger (Austria/Germany), Jana Winderen (Norway) and Francisco López (Spain), as well as workshops led by MIT researchers. During the Swamp Radio workshop the artists Rasa and Raitis will be presenting their new installation –Biotricity. Swamp Radio Lab, and will engage with the participants in creative experiments with “bacteria battery” exploring the wetlands of Venice.

Biotricity. Swamp Radio Lab, installation by Rasa Smite and Raitis Smits sonifies and visualizes the fluctuation of bacterial electricity generation process. The artists are interpreting the collected data from the environmental monitoring to reveal the invisible activity in nature such as happening in the swamp ecosystems. This spring the artists their Biotricity research, which was initially started in the bogs of Latvia, were expanding into water reservoirs and marshlands of Boston area, together with their students from MIT ACT Sound Class performing field recordings and environmental data sonification in Fresh Pond. Biotricity. Swamp Radio installation was first shown from April 28 until May 10, at the MIT Center for Theoretical Physics, celebrating the 50th anniversary of CAVS (The Center for Advanced Visual Studies). Now, extended, and in its final shape, the Biotricity. Swamp Radio Lab artworkis set up to be open during the Swamp Radio week in Venice. 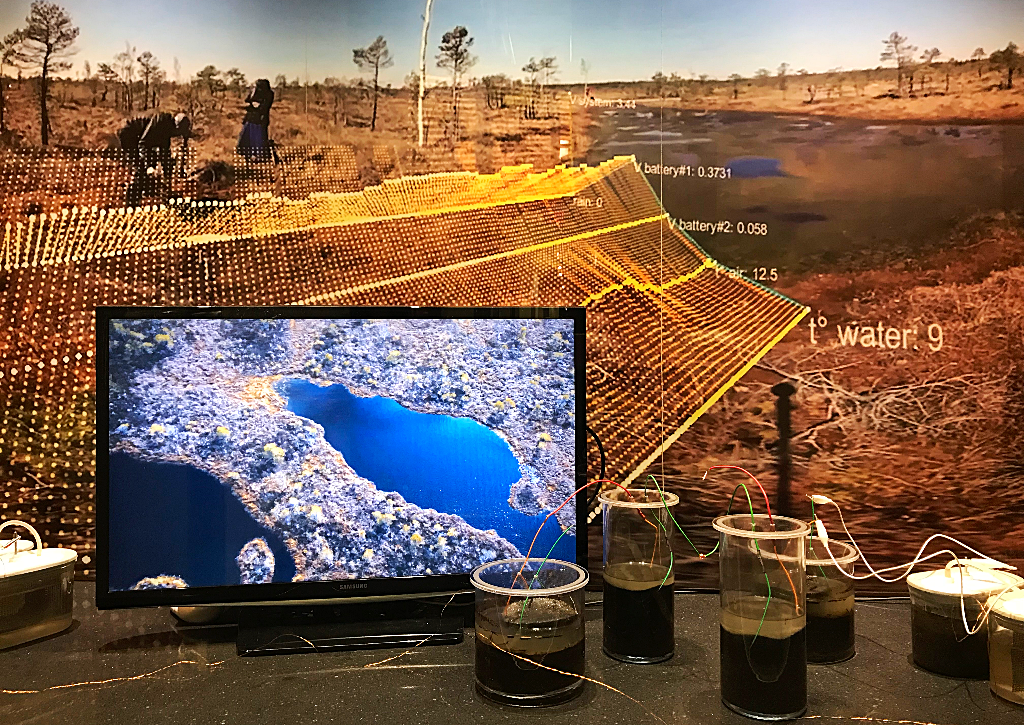 Rasa Smite and Raitis Smits, the interlocators of the Swamp Radio in Venice, are internationally acknowledged artists and culture innovators, who work in intersection of art, science and new technologies; they are founders of RIXC Center for New Media Culture, curators of the RIXC Art Science Festival, and internet radio pioneers – they were awarded Prix Ars Electronica in 1998 for the “Xchange” streaming audio and sound art project on the Internet. Their recent artworks “Talk to Me. Human-Plant Commmunication” and “Biotricity – the Poetics of Green Energy” have been shown in Ars Electronica Center in Linz, Van Abbe Contemporary Art Museum in Eindhoven, ZKM Center in Karlsruhe, National Science and Technology Museum in Stockholm. This spring they also were teaching the sound class at the MIT Art, Culture and Technology Programme. (smitesmits.com) 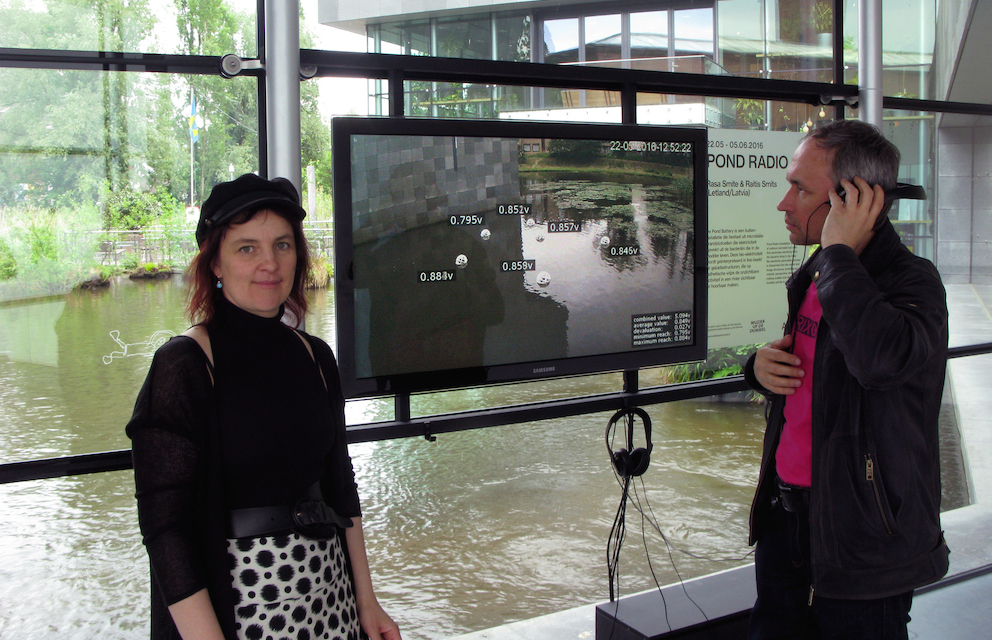 And last, but not least, The Ecodata symposium taking place on Saturday, May 26 from 18.00 until 20.00,will be closing the Swamp Radio week. The ECODATA—ECOMEDIA—ECOAESTHETICS project researchers from Basel Art and Design Academy FHNW will be introducing their collaboration with the forest and climate change scientists in Swiss Alps. In the Valais, southwest Switzerland, is located the Pfynwald forest, which is unique for both its state of crisis caused by the local aluminum industry and by its drought intensified by climate change. It has been under close surveillance of natural-scientists for more than 25 years. In close cooperation with The Swiss Federal Institute for Forest, Snow and Landscape Research (WSL), project initiator Yvonne Volkart investigates technoscientific methods based on registering, collecting and interpreting data in the arts, and the artists-researchers Marcus Maeder, Rasa Smite and Aline Veillat develop aesthetic projects related to this alpine forest.During the Swamp Radio symposium in Venice, the Ecodata team will open up a discussion – in what sense data monitoring, visualisation, sonification and critical mapping might enhance participation and raise awareness of the ecological. Participating in Ecodata discussion will be also Marianne Burki, Head of Visual Arts at the Swiss Arts Council Pro Helvetia. 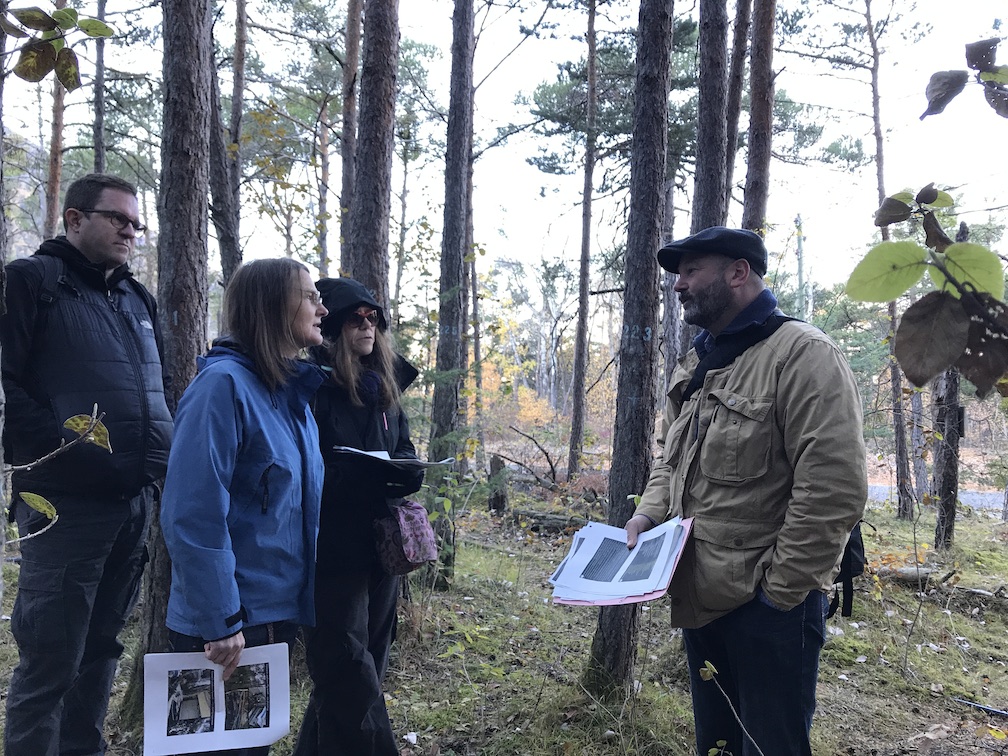 The “Ecodata” project research group meetis with WSL scientists during their field trip to the Pfynwald forest. Photo: Rasa Smite

The official opening of Swamp School, in the 16th Venice Architecture Biennale, will take place on Friday, May 25, from 4pm – 6pm.

Biotricity. Swamp Radio Laboratory, installation by Rasa Smite and Raitis Smits will be on view until November 25, in the Il Giardino Bianco Art Space, Castello 1814 – via Garibaldi, Venezia.

The press release was created by RIXC (http://rixc.org), contact: rixc@rixc.org

Partners: MIT Art, Culture and Technology program, The Institute of Aesthetic Practice and Theory at the Academy of Art and Design FHNW Base, New Media Art Programme of Liepaja University.