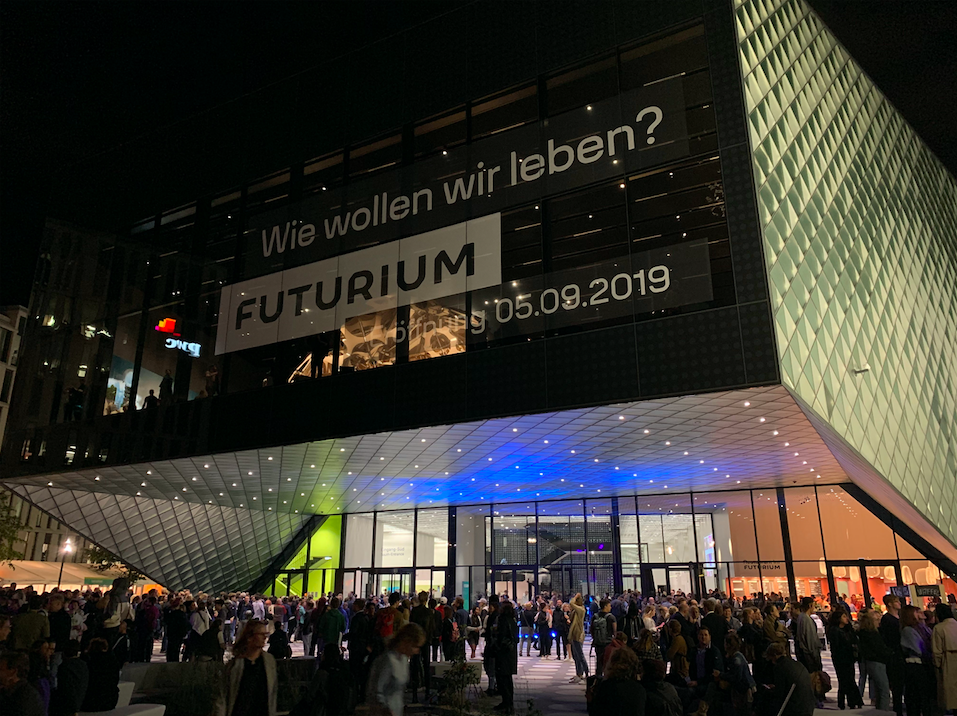 The opening of the “Futurium” museum's building. Photo: Raitis Smits.

Futurium is a house of futures which welcomes visitors of all ages to take a look into tomorrow. It unites under the same roof a museum of the future with vivid scenarios, a laboratory of the future in which visitors can make their own explorations and a forum of the future for dialogue between players from different spheres. Foreseeable, imaginable and desirable drafts of possible futures are presented and discussed at Futurium. Futurium pools experts and players from the spheres of science and culture, politics, business and society - it is open to everybody who wants to share their opinion concerning the future. First three years - until the end of 2022 - museum is admission free. 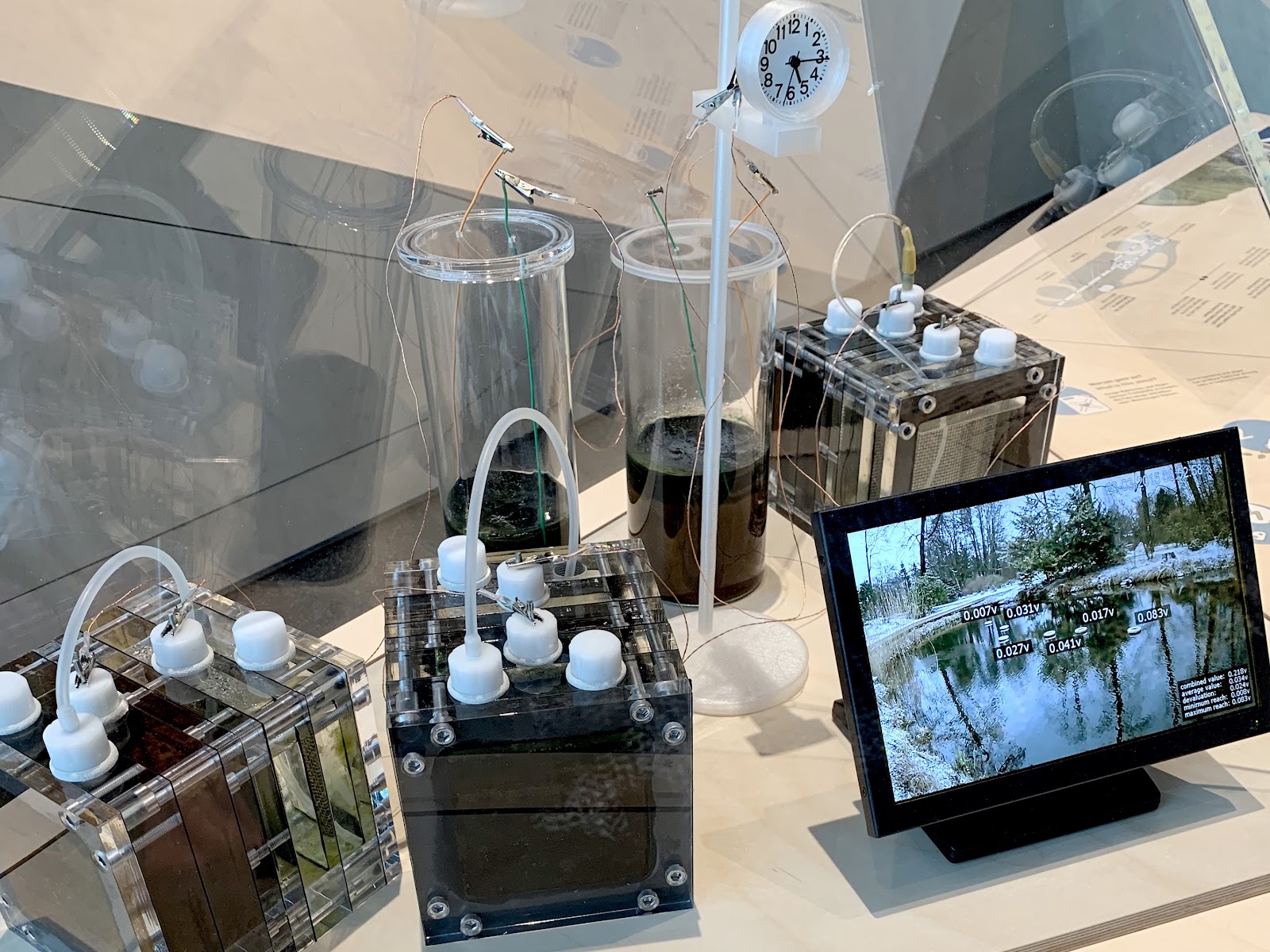 From September 5, the installation “Biotricity - Bacteria Time” will be on view at the permanent exposition of the Futurium museum. The idea's authors of the art and science project “Biotricity - Bacteria Time” are RIXC artists Rasa Smite and Raitis Smits, who in collaboration with scientists of UL's (University of Latvia) Institute of Solid State Physics and the Faculty of Biology and the new scientist Arturs Grunduls began their experiments with MFC (micro-bial fuel cell). This “green” energy technology is based on the principle that bacteria which live on the seabed, in the mud or the bottom of lakes and ponds, where is a lot of organic matter, but isn't much oxygen, generate a small amount of electric current. As the result of these experiments, artists Rasa Smite and Raitis Smits have created a series of artworks called “Biotricity”, trying out “living bacteria's” activity in different settings. 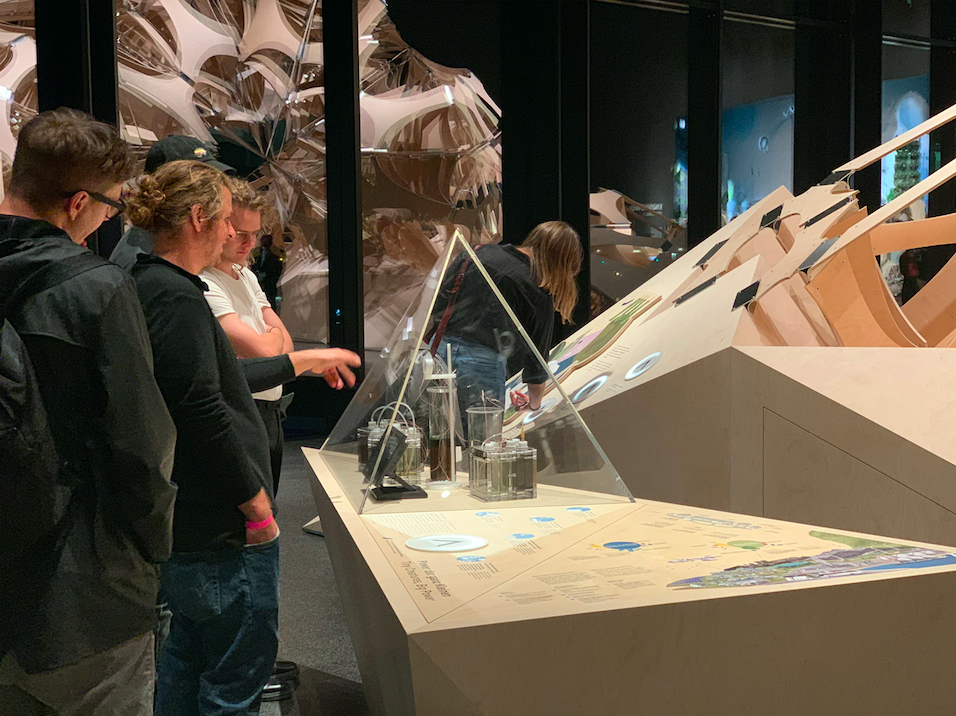 The installation “Biotricity - Bacteria Time” in Futurium museum, Berlin consists from several “mud batteries” where each battery produces about half a volt of electricity. The "mud batteries" are connected in a circuit, and electric current is used to power a clock. Because electricity in this case is "produced" by living microorganisms, energy fluctuates, and electricity flows to the clock unevenly - sometimes producing more electricity, sometimes even generating insufficient amount. Consequently, the clock shows the time according to bacteria activity. The installation is accompanied by video of outdoor  experiments of “bacteria battery” - at the UL (University of Latvia) Botanical Garden Pond (2014-2015). In this time-lapse video time is "compressed" - the 10-minute video features seven-month environmental footage and electrical oscillation data from summer to spring, creating a green energy poetics.

The artworks from the Biotricity series have been previously exhibited at the Venice Architecture Biennale (2018), at the exhibition of the Ars Electronica Festival in Linz (2018), at HeK Electronic Arts Center in Basel and elsewhere. The real-time audio installation “Biotricity - Pond Battery” (2014-2015) is currently on view, until October 26, at the Laboral Center for the Arts and Creative Industries in Gijon, Spain, at the exhibition “Eco-visionaries”, which exhibits 12 works of art that seek to discover new relationships between the biosphere and the technosphere. 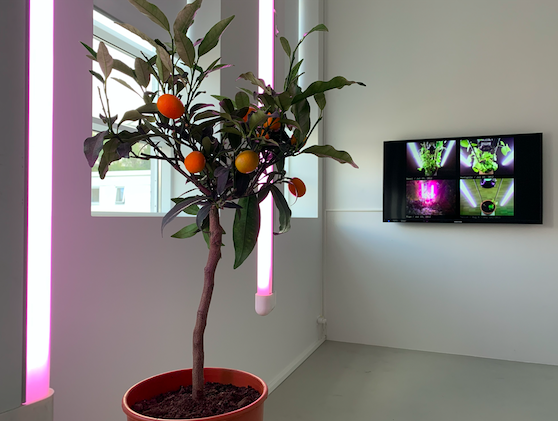 However, until September 22 at Akureyri Art Museum, Iceland on view will be multimedia installation by Rasa Smite and Raitis Smits in collaboration with Martins Ratniks - “Talk to me” - which was chosen as a key message and name of the Latvian contemporary art exhibition. “Talk to Me ” is an artistic inquiry into human and plant communication, exploring the relationships between us and other species that live on this planet, like plants. The idea of the artwork “Talk to me” was born by asking a question: Would plants grow better, taller and more beautiful if people talked with them?  What do scientists say about it? And do plants have something to say about it too? Authors were particularly interested if people would actually “talk” with plants. To further encourage this communication, the artists developed an online interface in various languages - English, German, Latvian, French.The encouraging messages sent by the people were read aloud in a computer voice to the plants growing at the exhibition. As it turned out, people talked a lot with the plants and they do it every day in Iceland. So far, over several years, a total number of 20 000 messages have been collected, and in Iceland since June 1, 2000, since the opening of the exhibition,  there already have been collected around 2000 messages. This time artists as a part of the installation “Talk to me” have chosen a mandarin tree - referencing the climate change and melting glaciers in Iceland. Everybody is still welcome to talk with the plant and send it encouraging messages - http://talktome.rixc.lv 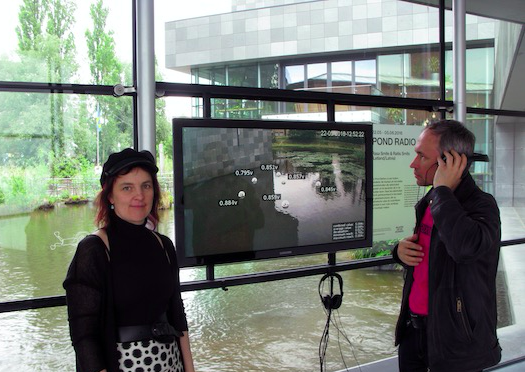 The authors of the artwork “Biotricity” - Rasa Smite and Raitis Smits are internationally acknowledged artists and culture innovators, who work in intersection of art, science and new technologies; they are founders of RIXC Center for New Media Culture, curators of the RIXC Art Science Festival, and pioneers of internet radio and new media art. Rasa Smite is a professor at Liepaja University and Raitis Smits - associate professor at the Art Academy of Latvia. The artists are also guest lecturers at the MIT Massachusetts Institute of Technology in Boston, the HfG Graduate School of Art and Design in Karlsruhe, Germany, and the Basel Academy of Art and Design. In 2017 they were awarded the Culture Excellence Award of the Ministry of Culture of the Republic of Latvia and in 2019 they were nominated for the Purvītis Prize for the personal exhibition “Micro-world fluctuations”.

Supported by the Ministry of Culture of the Republic of Latvia, State Culture Capital Foundation of Latvia.